One of the most important things a guy can learn when adventuring in the domain of seduction is to learn how to connect with women. If you can create an undeniable connection with a woman that you’ve just met, then your chances of success skyrocket ten folds.

Even if your approach, conversation skills and overall performance don’t work perfectly, if you have a connection, then she’ll still remember you long after you part ways. You can be the smoothest guy in the world, but if you can’t connect with the women you talk to, they will enjoy the ride while it last, but you can forget about having a second date.

So what forms a connection between two people? The common answers that you’ll hear vary from “liking the same things” and to “just being similar” but this couldn’t be further from the truth. What really forms a connection is when people two people communicate with each other while being on the same wavelength. 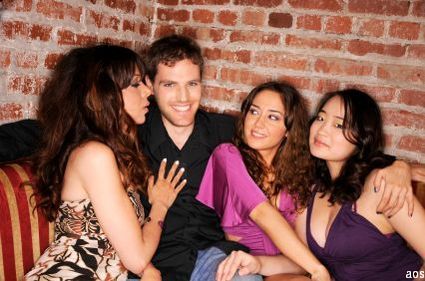 The wavelength concept can best be described by a cheesy movie scene. Imagine a scenario in which a lonely girl walks into the book store, and begins perusing the politics section. At the same time, a guy walks in, lonely as well, kind of walks in and goes to the politics section to look for a book. She drops a book, he picks it up and hands it back to her.

When these two meet at the same section of the bookstore, they in perfect harmony. Their objectives are similar, energy levels similar, and things just click. It doesn’t matter what kind of shows she likes, or where she likes to hang out… if they can connect in that one moment, they’ll be likely to see each other again.

Being On the Same Wavelength

Being on the same wavelength means matching the other person’s emotional state and having a common objective. If you’re in a bar where everyone’s drunk and in the mood to have fun, then if you try to have a serious conversation, you’ll never connect. On the other hand, if you can match their ‘let’s just have fun’ state, then it’s likely that you’ll be more successful. Read our article on attracting girls in clubs.

This frequently applies to scenarios during the day. When a woman is just trying to get to a place in a hurry, don’t try to stop her for a serious conversation. Instead, be in a hurry yourself to get somewhere, and while you’re both in a hurry, try to strike up a conversation.

A little trick to help you achieve the same wavelength is to ask yourself: What’s going through this person’s mind right now? Figure out their reality first, and then it will be much easier to match it.

Remember, achieving the same wavelength requires a developed social intelligence. This means that you’re sensitive and acute to how others are feeling around you. If you can pick up the subtle (and sometimes not-so subtle) cues that people project, you’ll be in a better position to adopt a similar state as them.

Now here’s where most guys go wrong: You can’t fake it!

Being True To Yourself

If you’re in a party and you’re only pretending to be there to have fun, they’ll know. In order to really connect with girls, you must truly adopt the emotional state that she is in. If she’s happy, then you must truly be happy, likewise, if she’s in a hurry, then you really need to be a in a hurry!

So the next time you’re feeling a little down, find another girl that seems to be going through the same thing and talk to her. You’ll connect and it might just change both of your moods!

Is there a some kind of top secret way how to connect with women?

Yes. Here is the secret: we are normal people. We are not mysterious, we are not a different species. We don't need to be decoded or dealt with in a special way. I don't understand how you could say what all women say to you "makes no sense." It's not in code, take what they say at face value and learn social norms, same as when you speak with other men.