I have to admit, I wasn’t even planning to attract any girls on that day. But I suppose after you learn about women and seduction long enough, and practice it, it just comes naturally. It was a cold Saturday, and I was at an American airport, about to fly back to Canada. I was checking my baggage and making random conversation with the dude next to me when a lovely young brunette walked up next to us. She ran her credit card through the check-in machine and then dropped it on the floor.

“Thank you!”, I said joyfully before I picked it up and handed it back to her.

The three of us laughed, and the guy chimed in: “Guess drinks are on her today!” He was right. She bought me a drink later. Lesson learned: Be in a good mood when approach women!

Many ways of doing the same thing

You see, I’m sure that many people would have done the same thing I did in that situation: picking up her card for her is a matter of courtesy and politeness. But doing it with a bit of cockiness, with fun, helps a lot! The classic male reaction would have been to either say nothing, or “here you go”, while handing it back. She would have forgotten about you the second she turned her back. She did not forget about me, though. I was lucky enough to be on the same flight with her, and when I arrived at the gate, it was only logical to find her and sit next to her. I walked straight up, asked her to take her stuff off the seat next to her and sat down. 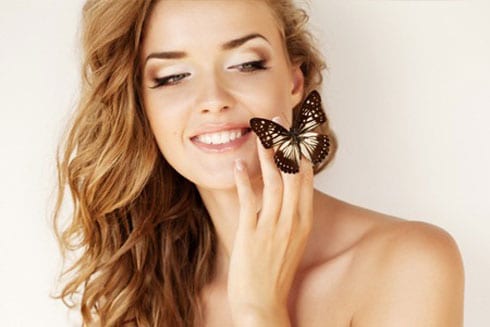 Try a smile in the mirror

You know, it’s funny. A smile seems so effortless, you may wonder what difference it can really make. We’re talking about moving a couple of facial muscles, what, a centimeter? I still catch myself wondering how it can have such an impact on others, when I don’t even feel much different (anymore) whether I smile or not. But when I talked to that girl at the airport again, it was with a coy smile and boy did it make a difference. “So, you still got your credit card?”, I asked – casually, while putting my bracelet back on, that I had to take off at the security gates. She laughed again. “Yeah…”

Next time you stand in front of a mirror, ask yourself what is awesome about you. Then smile at yourself. Not a pathetic, subservient “please appreciate me” smile, but a smile that says: “Damn this is cool, life is awesome and you, my dear, look hot.”

Have fun with the girl!

From there, I went into a normal conversation with that girl. What she was up to. Where she was heading. Feeding off her responses, staying with what she was saying. At the same time, in my head, I pictured myself as a cool guy talking to a fun person. Believe me, that’s something I had to practice for a long while before I actually had it down! In the past, I used to picture myself as a common peasant, having stumbled upon the unique opportunity to talk to an unattainable princess. No, man. Not helping.

These days, the girl’s my buddy. I assume she’s cool, fun, and I talk to her that way. I didn’t get to sit next to airport girl on the plane, but when we reached our destination, we had some time to wait for our connecting flights. Guess who bought me a drink then.

They’re there to have fun with

The universe puts girls into your way all the time – they sit next to you on the bus, they stand in line with you at the supermarket, they hang out on the lawn of your college campus. Learn to relax and change your perspective: these are normal people, not angelic princess aliens. And what’s more, there’s a good chance they’re fun! Think of your fun buddies. How do you talk to them? You’ll easily find something to open a lovely girl with: a ring she’s wearing, the colour of her hair (does it match her eyebrows? If not, it’s probably dyed), a piercing. Now, you’re a sociable guy. You want to make conversation. Pass the time. Be friendly. So be enthusiastic when you approach women – they’ll thank you for it, and before you know it, there’s another number in your cell phone.

What would happen if all men stopped approaching and complimenting women tomorrow?

My life would remain unchanged.

No, you will be single forever.

Yes. I know it's tough at 18, but in a few years, the minds of the people you interact with will explode in maturity 10 fold. I promise!

Omg he's short. Omg she has big hips. Omg he has acne.

Soon, it's "this person has a great personality, and is ambitious and is funny and is caring about others and generous"

All words that don't come up at 18 because it's a popularity contest.

Women of this sub what do you wish men did more often when approaching you?

I've said it before: Be open and friendly and if you have a good reciprocal exchange then tell them you've enjoyed talking and ask if they would like to continue this conversation over coffee sometime. It's not aggressive or weird but unmistakably a genuine compliment and a request to get to know them better. Win, win, win.

What sort of things hold you back from approaching women?

If you want to get approached by guys, maybe you should approach them?

Theres no point in approaching women do you agree?

I find it pointless, because what is there your typical woman has to say that I would be interested in hearing or discussing?

Case and point: Buddy of mine and I were talking about Dragon Age: Inquisition the other day, namely the mechanics for one of the dragons I was having trouble with. Some girl neither of us knows butt in and starting talking about how much she liked the facial markings on female elf characters on "that game my boyfriend plays". She obviously heard enough of the conversation to identify what we were playing and thus had to hear the specifics of it in order to recognize it. And THAT'S what you choose to interject with? Blew my mind.

Only women I avidly approach are bank tellers, cashiers, and the postwoman.