You talk too much; far too much. Women say they want a man who listens right? What does that mean? Society teaches us to, “blah, blah, blah,” until our lips are purple and swollen. What if you slowed down and took a minute to listen to her words—to accept her invitations.

I friend and I were buying some clothes and an absent minded hottie bumped into my arm. I ask her if she is maybe “a little drunk?” She laughs and explains she is “just clumsy like that.”

My friend is a little lacking in the women department, so I step back and let him practice his social skills. He discovers she’s from Alaska and teases her about being a seal hunter. He remembers not to over-do the cocky thing, and then gives her a high five. All seems to be going well.

But he misses a very important cue. It goes like this: 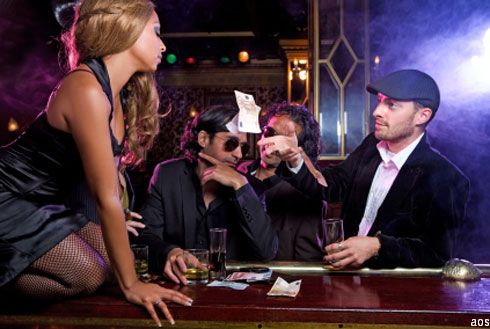 Him: This is your first time in Canada? Do you know what our Capitol is?

Her: If I get this right are you going to buy me lunch?

Her: I’m not a geography major.

This goes on for another thirty seconds and I cringe. I want to rip my eyes out. I want to slap his stupid face. I want to scream, “Listen to the girl!!!!! She just asked you to take her to lunch!!!!”

The Attraction Is There

Newer guys often think they need to keep going on, and on, and on, to create more attraction. The attraction is there! In this case, he should have just said, “Where would you like to eat?” At this point the woman would either agree to the insta-date, or carry on with her day.

Of course you don’t buy the girl lunch. She pays for herself.

New guys get so caught up in “gaming” and practicing push pull, they forget that the girl actually wants to hook up. You don’t always need to talk. Sometimes you need to slow your mind and accept the information she provides.

In this case my friend got her number. I don’t think he ever saw her again but it was a lesson learned.

Again on listening. One powerful technique is, “The Empty Space.” That’s where you leave gaps in the conversation that sucks the other person in. They feel some tension and will talk to ease that tension, but in turn that creates more tension, and gives you more social power. Example:

Him: You know that feeling when you discover something new? Like when you meet a new person, or get a new toy?

Her: Ummm, yeah like once I got a new car…..blah, blah

The gaps can give the impression that you are an empathic being capable of listening. And in turn, you may actually become that guy! The most used word in the dictionary is, “I.” Get people to talk about their passions, beliefs and dreams. Listen and try to remember. Take your eyes off her chest for just a few minutes. Stop thinking of the next seduction tactic and utilize the information she provides you with. That information is vital.

Once I met a chick outside a bar. I overheard her say, “Yeah…I really want to get laid tonight.” She spun and walked inside the pub. I ran up behind her, tapped her shoulder and said something silly about her earrings. It was enough. Two hours later she rolled off me and had a cigarette. Then she spoke, and I listened. Sometimes it’s good to just shut up and be cool.

From now on, slow things down. Take the batteries out of the monkey. Listen and enjoy the sound of her voice.

How do you find new music to listen to?

I use spotify Radios

How often do you listen to kpop?

How are you going to listen to it?

With my best friend

How to get her to listen to me?

You should respect her wish to use her native laungage and to teach your baby it.

But that works both ways. What about your native laungage and your bond with the child? That's equally as important. Especially in a country where the primary laungage is English.

She's being unfair. You need to have a serious discussion with her and tell her when she yells at you in her laungage it's not a proper communication because you don't understand. She is breaking down the communication between you and her, and you and your child. That's not on and will only lead to problems.

How can anybody listen to kanye west?

Because not everybody has the same music tastes as you?