I had a student asking me about how to impress girls on Facebook today and instead of just replying to him, I thought I would take a step further and write up a quick guide for everyone to see. Facebook, in spite of being an online medium, void of any real physical contact, it is a place where people can get to know you a little bit better. In fact, the more people look at your Facebook profile, the more they will feel as if they know you. So if you’re interested in impressing a few people on your friend’s list, then read on because we’ll be covering all the major points. 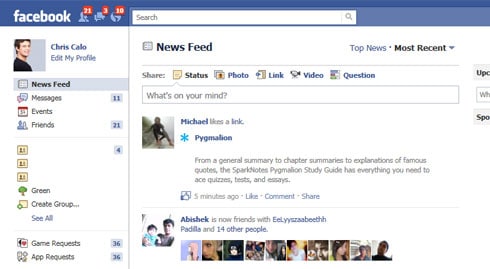 The best pictures will always be taken by someone else, and you’ll be “caught in the moment” doing something that you love. Unfortunately, unless you have a friend that’s an avid photographer, it’s likely that you won’t have many pictures taken like this! So instead, the next time you go out to do something fun (need ideas, read a guide to a better life, bring a camera with you. When you’re having fun, take pictures of everyone and get them to take pictures of you as well. Those are usually the best pictures.

Are you fat with a closeup of your face? People will know. Maybe you’re at a weird angle and people can’t see your face… that’s also bad picture. If you’re trying to hide what you really look like with artsy type pictures, people will assume that you are insecure about your appearance. Definitely not what we’re going for!

Also, make sure that the picture is of you. Some people tend to put weird, abstract pictures that don’t actually mean anything. Sure they might look cool, but they won’t make other people think of you when they look at it. People will ignore abstract pictures of objects and scenery, so make sure you’re in that picture!

The general rule is, the more you see someone, the more likely you are to like them. So if you want others to feel as if they know you, or even like you, then you should make sure that they are checking out your profile as frequently as possible. On a related note, you might want to read how to get a girl to like you.

So what makes people look at a profile? Well… the biggest answer is usually a change in picture.

Yep, when you have frequent picture changes (and good ones), people tend to be curious and want to see the whole thing. What context was it taken in? What were you doing? Why is there a new picture?

People are inherently curious, and having new pictures will encourage them to view your profile on a regular basis. It also hints at the fact that you must be a social and popular person if people are always taking pictures of you. (That means: don’t take self-shot pictures every day and post them on Facebook.) Instead, these regularly updated pictures should be taken by other people during your social activities!

Get people posting to your wall

Assuming you have people looking at your profile out of curiosity, you’ll want them to see a bunch of fascinating things on your wall. If they get to your wall and there is nothing there, it looks like you’re a loner. However, if people are constantly posting random messages on your wall, you’ll seem like the most popular person on Facebook.

So how do we get people to post on our wall?

Now I know what you’re thinking: “Won’t it show that I wrote on everyone wall first?” Well… yes, but it doesn’t matter. People don’t care if you were writing on their wall (in fact, most of the time they like it). What people will notice when visiting your profile is how often people have written on YOUR wall. It’s not like they are going to go and check all your friends’ wall to see if you posted or not. Read our building a social circle article to help out with those new friends.

Frequent wall posts on your friend’s profile will encourage them to post on yours as well. What should you post? Well, try semi-personal messages. “Last night was awesome! We should do it again sometime” will encourage people to post a nice reply on your wall.

How nice would it be to have someone post:

“Yeah, I had a great time last night! Let’s do it again soon” on your wall ?

The more of these that you have, the more people visiting your profile will begin to believe that you are a truly, the most popular and likeable guy in the world.

The first thing you should know is that Facebook is not a dating site. Even though it might lead to dates, it’s not a place for guys to randomly hit on girls all day. Because everyone is connected, the word will quickly get out and things can become public very quickly. So what’s the best, “under the radar” way to get a girl’s attention? First, it’s so show up in her feed all the time.

One of the best ways to seem quite active is to attend all the events that you can. Whenever you attend events, it alerts everyone else that you’re going.

In other words, it tells people that you are busy doing fun activities! (Isn’t Facebook great?)

So be as busy as you can by accepting all the activity invites that you can.

Even better… create your OWN event and invite them. People want to be around organizers, so if you can, organize a few events and invite the girls that you like. They might not come, but they’ll at least receive the invitation which shows that you’re social, fun and warm to them. What’s more is… if someone invites you to a party, then it’s likely that you’ll return the favor at a later point. This is the best way to have girls inviting you over to their parties. The only way to impress a girl is to lead an exciting life.

Here’s a place where many people go wrong. They over-use the chat feature in Facebook. “Ohh, that girl I like is online, let me message her!” And immediately, they start talking to her. Soon enough, she’s scare of going online because she gets bombarded by everyone messaging her (In case you’re wondering, that’s why there are many people that don’t go on the Facebook chat). In fact, that’s why I don’t go on Facebook chat myself… The last time I was on, I had 12+ instant-chat messages from people wanting to talk, asking me questions, etc. I love you guys, but that’s just too much to handle at once!

So if you chat with a girl, make it light and brief. Whenever you message a girl on Facebook, she automatically knows that you like her. (Guys tend to only chat with girls they like on Facebook). Make sure you read how to talk to girls, then you can joke around with her, and if the vibe’s good, invite her out right then and there!

Girls of reddit whats a seemingly small habit guys can have that impress you?

Keeps wastebasket in the bathroom(s).

Girls of reddit what is something a guy can do that would really impress you?

Lick his own elbow

Which cars have you found to really impress girls the most?

Whatever you get will sure as hell impress dudes though. You'll be drowning in dick.

Try to impress girls with pizza?

Read that as a chode named Chad. Probably still an accurate description.

Have you ever used crypto stuff to impress girls?