Chemistry…chemistry…chemistry. A life force, no doubt. When you have that attraction with someone it’s undeniable and potent – tequila straight up, swigging from the bottle. When you meet someone and feel that attraction, you’re like cruising in a fog. There have been times I’ve experienced it and I felt like I was floating almost. It’s not the run of the mill interest or attraction – it’s deeper, it is energy with its own velocity.

Chemistry is a tough roommate. I mean, it charges in like it owns the joint. I’ve even had the experience of being very physically attracted to someone whose personality I didn’t even like. It was chemistry for sure because I couldn’t even stop being attracted to him even when I didn’t like “him”. Standing next to him was electric. Was he cute? Not wildly so. He was even 2 inches shorter than me! 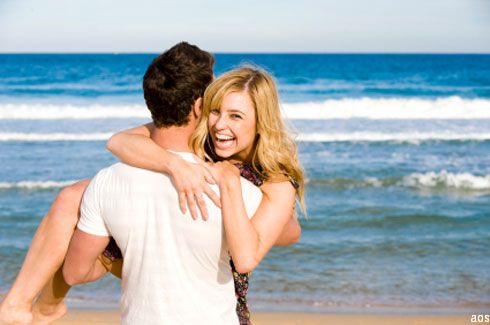 Could I have been any more attracted to him?

It was pure potent desire. All I could think of was how to get him somewhere alone (I didn’t, he was married.)

When chemistry invades and sets up its home, I’m hoping that man is feeling it too… I’m so tangled in the chemistry I have to force a pull back to take stock of what he’s feeling. I’m so drunk with attraction, I force myself to go through the steps… measure his eye contact, his interest in what I’m saying, the intensity I can feel when he’s looking in my eyes.

Is he listening hard?

Is he into me too?

Kind of or a lot?

Act as if it’s a yes. I mean the worse that can happen is she’ll let you know you’re wrong. If you are, you flip that card.

I’ll tell you that a man moving things along is really appreciated by a woman. I’ve asked my friends – they love men who do the driving. When we’re into a man, we are liking it when he touches us, grabs our hand, puts his arm around us (not draping on us like a long skinny shawl, but something quick. You can drape your arm for a long time when we know each other). (Read how to get physical with women and kino)

Grab me, pull me close quick and then let go. Do the things you would do if we were intimate, like whisper into my ear. Be playful. Teasing me really sweetly. I’ll melt.

Let me know that we’re connecting but make it quick and short…when we know each other more, we can linger. I love when a guy kisses me without waiting for the “expected” end of the first date, second date, or whatever. I love that he’s into me and being spontaneous and can read that I’m just as much into him. I think a lot of touching is nice. I wouldn’t get into too much “grabbing”…let the energy build up a bit so that we both really want to go there. But a lot of drawing me in close quickly, grabbing my hand or arm, making it clear there is some serious energy here, builds things up and moves things along. I’m loving it when I am really liking you… so do it.