Even if you’re not super attractive and don’t possess a magnetic aura that attracts women, you can still run into the kind of situation I encountered in a club before I started studying attraction. I was on the dance floor when this cute lady came up and danced close to me, smiling and initiating heavy eye contact. She had done the approach, and frankly, I didn’t know what to do. I blew it – and so could you, even if you’ve been practicing your seduction skills for a while now! It’s one thing to work on your attractiveness and confidence, but are you prepared for what happens when you are successful with women? What happens when a woman approaches a man ? How do you react when a woman shows interest?

She looks over from the other end of the room, seeking eye contact with a teasing smile. It’s great – she saves you the “trouble” of opening and pulls you right into the interaction. The trouble is, this can become a trap, because she’s seizing control of the situation – and if you give in, you may just be on your way to paying the bill. Ask yourself: 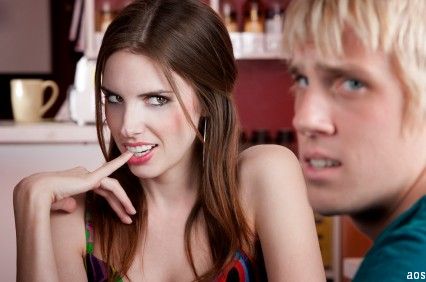 It’s flattering, but there’s no way you should unquestioningly grab her attention. Regardless of who makes the first move, the same rules apply: you can’t let her just pick you out of the crowd and pull you into her reality. You’re still calling the shots in your world. She’s interested? Great! Have her come over so you can see what she wants. Is it just because you look hot? Or the bulge that your fat wallet puts in your pants? You know what you want, and it’s a girl that’s interested in your personality.

Don’t let her control the interaction.

Don’t get up and walk over to her. That’s your first sign of subordination. I know this goes against what we’re usually used to as guys, and that usually guys should take the lead. However, in this reversed situation of the woman ‘making the moves’, you must play the part, albeit from a male perspective.

If you supply to her demands as soon as she gives you a glance, the next thing you know, she’ll be asking you to buy her a drink!

You can start out with some playful eye contact and flirty smiling, if she initiated contact then make her come over to see you! Signal your intentions with a subtle head motion, or even a hand gesture suggesting that she comes over. The message should be clear: “You noticed me first so I want you to come over and talk to me!”

That being said, there are some girls that are extremely shy and won’t have the courage to approach a guy… even if he signals her to come over. You have to judge the situation, and if you see she’s just too shy, you’ll need to be the guy that goes over and makes the approach. That’s a man’s job if she can’t do it.

Allow her into your space.

A great approach if she’s too shy to approach you, is to walk over, get her hand and lead her back to your space: leading a girl around is a powerful thing to do, and this has a nice twist as it seems like you’re giving in at first. Whatever you choose, if she’s interested in getting to know you, she will follow; if she declines and motions you to follow her lead instead, turn back to your friends and see what happens next. Women test men all the time, now this is your way of testing her. How sincere can she be if she drops you for not following her lead?

Remain playful and honest about the approach

Female attention catches many men off-guard – our society’s gender roles call for the males to open up the females, and not many men have the powerful attraction that galvanizes women into action. It’s understandable that many don’t know how to react when a woman shows interest – but don’t let that stop you from learning!

If you’re caught off guard and a woman is strongly suggesting that she wants to initiate contact, then just say “hi”. Don’t figure out a reason why you’re saying hi, and don’t think about what you’re going to say after, just say hi. Because she initiated the interaction, she’ll look for reasons to find you interesting and all you need to do is show up.

When the moment comes to talk, if she doesn’t open up the conversation, you can easily do so: by your previous non-verbal responses to her interest, you’ve set up a frame that you can move around in now. How about beating her to the line “So you’re the one that wants to buy me a drink”? Any response should be appropriate to the established vibe – you’d use this one on a perky woman, a shy girl might enjoy a more sincere, inviting approach, like introducing yourself and noticing something about her (the way she walks, a piece of jewelry, the colour of her hair) right off the bat.

When all is said and done, the ground rules stay the same. Don’t take her interest and run with it, don’t turn yourself into an easy catch. She might be interested for all kinds of reasons, and you should take the lead in the situation and find them out. From there, you’ll be fine with what you learned about attraction already.

Flipping the roles might also give you a little insight to how girls feel when you’re hinting that you want to approach them. Although women tend to be more used to being approached, the feelings are still the same.

1. What are some initial signs that a woman is interested in you?

One initial sign that a woman is interested in you is if she starts to mirror your body language. This means that if you are leaning in, she will lean in as well; if you are crossing your legs, she will follow suit.

2. What are some common mistakes men make when trying to pursue a woman?

There are a lot of mistakes that men make when trying to pursue a woman, but here are some of the most common ones:
1. Not being assertive enough: A lot of men think that they need to be nice and sweet in order to win a woman over, but this is often not the case. Women appreciate men who are assertive and who know what they want.
2. Being too clingy: This is a major turn-off for women.

3. How can you tell if a woman is playing hard to get or just not interested?

If a woman is playing hard to get, she may be more coy and reserved than usual, and may take longer to respond to texts or calls. She may also be more flirty with other people in an attempt to make you jealous.

4. What is the best way to approach a woman you’re interested in?

Some tips on how to approach a woman you’re interested in might include being confident, making eye contact, and starting a conversation. Additionally, it can be helpful to listen to what she has to say and to be respectful of her personal space.

5. How can you tell if a woman is interested in you after you’ve talked to her?

There are some signs that may indicate that she is interested. For example, she may maintain eye contact with you throughout the conversation, or she may touch your arm or shoulder while talking to you. She may also lean in close to you while talking, or smile and laugh a lot.

6. What are some things you can do to keep a woman’s interest?

7. What are some signs that a woman is no longer interested in you?

8. What should you do if a woman you’re interested in starts seeing someone else?

9. How can you tell if a woman is interested in you?

10. How can you tell if a woman is just being friendly?

It can be difficult to tell if a woman is just being friendly or if she is interested in you romantically. There are a few things you can look for, however, that may give you a clue.

First, see how she treats other people. If she is equally friendly with everyone she meets, then it’s likely that she is just a friendly person.

11. How can you tell if a woman is interested in you sexually?

12. Who should make the first move when a woman shows interest?

13. Who is more likely to initiate contact after a date – the man or the woman?

It is more likely that the man will initiate contact after a date. This is because, in most cases, it is the man who is expected to make the first move in a relationship. This is a societal norm that has been in place for many years, and is unlikely to change anytime soon.