When men try to list what attracts women to men, they usually mention looks, money and power. Those things help, but as we will see, there exists many more powerful traits that will attract women. The same thing applies to men, who in general will be attracted to a seductive smile, good body language (posture) and signs of healthy genes.

In general, women are much more perceptive and search out for personality more than just good looks. This is fortunate for most men because, let’s face it, we’re kind of rough looking. However, rough is good, it alludes to strength and reliability… it shows that you care more important things than looks. So if you look rough, that’s fine. Just don’t look like a pansy. 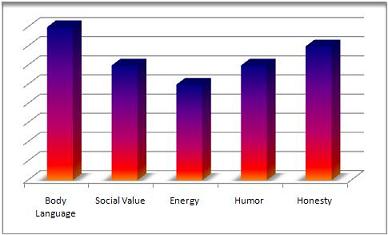 Well, you could fake it for a little while… sit up straight. No… not THAT straight, you don’t want to look like a stick. Shoulders back as if a 90km/h wind was pushing you. Head up! Make sure your head is UP ! If you’re doing all this right now, chances are you are as tense as a pole. The key to attractive body language is to be relaxed all while having good posture.

Now does this seem difficult ? Well it is… and its really not supposed to be. The reason its difficult for many people is because you are faking it! So the solution? Don’t fake it ! Our bodies are naturally prone to take this position when are muscles are exercised properly. Go bench press weights for an hour, workout your shoulders by doing rows and do 20 minutes of abs. Your body will naturally take a very attractive posture and you won’t have to think about it. Humans were never intended to think about body language and I strongly recommend you don’t. Work out once a day and that will solve itself. Here’s an exhaustive list of the top 100 things that attract women to men.

The second thing that attracts women is the social status of the man. How valuable is he to society, to his friends, to his family, to the human population in general? Its no surprise that someone who is valuable will be attractive to others. That’s almost the definition of the word! But how do we define value?

That depends on the individual. For some women, a powerful man who overlooks others is attractive. Others prefer a man that is loved by all his friends. Some women, actually… a LOT of women are attracted to rock stars because they are seen as valuable by tons of other competing women. What attracts women might vary a little, but the fundamentals of value still apply.

The concept of value is all relative

An nomad tribe will have an individual seen as more valuable than others, and he will be more desirable. In our modern culture, the boss, or CEO of a company is seen as valuable. Presidents are also seen as valuable, as Clinton clearly illustrated. The big problem that guys run into is that they try to fake value. They try to impress women by TELLING them they have value, “Look at my car”, “I do this and this”, “I’m important because”, etc. This is counter-productive. Trying to prove that you have value just makes you less valuable.

In order to gain value and ultimately attract women, you must do so naturally. Accomplish something! Be occupied with your life. Set goals and achieve them. When you look back on your life, think: “Would I want to date myself?”. If you’re proud of yourself, then you are valuable. People who are valuable don’t need to tell others that they are, it shows. Being valuable can go from getting the highest grade in the class (yes, women like smart men) to taking pride in having the nicest garden. I’m taking a really wild example here… but if you are really passionate about gardens and you spend all day perfecting your garden, then at the end of the day you will glow of pride and confidence. This makes you valuable, to yourself. Feeling valuable leads to others finding you valuable and consequently attractive as well.

Lastly, women respond to energy, laughter and honesty. Energy is contagious, and it sparks (literally) interest. If you are genuinely happy with life, and are excited to live it with her, then that in itself will be attractive. People want to be where the action is, they want to live their life to the fullest. This might be spontaneity one night, and a passionate night the next. If you’re where the party is at, then people will want to join you.

If you are a funny man, then you are definitely one step closer to being successful at attracting all kinds of women. Who doesn’t to laugh ? Hell, there are some guys I would want to date just because they are fun to be around, just as long as I get to be the big spoon. Laughter comes from not taking things too seriously, from teasing, from saying inappropriate things or exaggerating scenarios and stories. A funny man is considered to be ‘quick’, and strangely enough, cardiovascular activity increases the ‘sharpness’ of the mind. So does reading novels. So pick up a book, go for a jog, watch some funny videos and you’ll be set.

The last, and most difficult thing to find in a human being is honesty. Women are extremely attracted to genuine men. What attracts women more to one guy over another is the fact that she can trust him to be authentic and real with her. If you don’t fake your life, and tell it how it is, then this is the most attractive asset you can have. The reason is that people who are genuine are comfortable to be around with. Being genuine shows that you have fully accepted yourself and that you are proud to be who you are. If you dislike something, then say it! Chances are the other person is feeling the same thing as well. One of the most attractive things is seeing someone genuinely excited about something, its contagious and people will want to be with you to share your level of enthusiasm. Be genuinely excited about your life, its the only one you have.

Younger women what is it about older men that attracts you?

Their experience, their drive, and their age. A lot of them are wiser, generous, and just overall caring. Also, I feel like a little succubus when I turn them on. I love bringing out the beast out of these men.

What immediately attracts women to men?

Intelligence, confidence, and kindness. Pretty eyes are a plus too. It’s the subtle queues in the behavior that convey if the man is a high status male or some chump not worthy of our time.

What attracts women the most to a male?

Authenticity and naturalness. They can be confident or anxious, playful or serious, conventional or original. I don’t care as long as they are honestly themselves.

What is it that attracts you to bigger women?

Big boobs, Wider hips, thick asses and I really like nice big round tummies they’re like a third boob of jiggly awesomeness. Plus the way you gals jiggle when you walk..what’s not to like?
Frequently Asked Questions

Younger women what is it about older men that attracts you?

Their experience, their drive, and their age. A lot of them are wiser, generous, and just overall caring.

Also, I feel like a little succubus when I turn them on. I love bringing out the beast out of these men.

What immediately attracts women to men?

Pretty eyes are a plus too. It's the subtle queues in the behavior that convey if the man is a high status male or some chump not worthy of our time.

What attracts women the most to a male?

Authenticity and naturalness. They can be confident or anxious, playful or serious, conventional or original. I don't care as long as they are honestly themselves.

What is it that attracts you to bigger women?

Big boobs, Wider hips, thick asses and I really like nice big round tummies they're like a third boob of jiggly awesomeness.

Plus the way you gals jiggle when you walk..what's not to like?