Most of the extremely attractive women in this world are used to getting a lot of male attention.

They get special treatment, looks from everyone and often see pathetic attempts to pick them up. The fact of the matter is, this will only help you in succeeding with these women.

Once you realize what she’s going through, attracting women during the day will be much easier.

I want to take you through an ordinary day through a woman’s eyes.

First, she wakes up, looks in the mirror and thinks about how she looks ugly without makeup on, she thinks about her day, the things she wants to accomplish, the stresses of the day.

Afterwards, she showers, fixes her hair, puts makeup on and color matches what she’s wearing. As she leaves the house, she looks at herself in the mirror and thinks: “ok, now I look fine”

The day starts early, and on the subway she has guys discreetly and non-discreetly glancing at her. She tries to ignore this by reading a book, or by looking away, not interested. She knows that she can’t even look at a guy she finds attractive, because she’s already getting too much male attention and cannot handle anymore. If she were to see a guy she finds attractive, and signal him that she likes him, he might come over, start talking to her and this would draw more attention to her from the other undesirable men all over the place.

Her daily objective is to receive validation from men who are checking her out while being as discreet as possible, blending in. Its two opposites, but who said women were simple.

Then as she gets out, a man blurts out an awkward “hello” and then says nothing more. She knows its because he likes her, but she’s not really interested in a guy who is intimidated by her.

During her day, she is once again treated in special ways due to the way she looks. The older man behind the counter gives her a special discount at the store, the young clerk is giddy when he serves her and worse of all, the group of guys just stare at her as she walks by.

She respects none of these people, men in her mind, are weak.

The only time she was turned on was when she saw her teacher, or boss, doing something with confidence. She also saw an attractive guy walking by in the morning, but he didn’t notice her. (Read how to look good for men)

So she goes to sleep at night, needing some male attention, she logs on to MSN to talk to her guy friends who try to flirt with her while being friends. She goes to bed alone, waiting for the weekend where she can maybe let loose, drink a bit so she’ll have a reason to be less picky, so she can go home with a guy who’s at least going to satisfy her physical desires.

She cries a bit before going to bed, she doesn’t know why, but it feels right and helps her sleep.

Now what if.. during that day, she met an attractive guy who didn’t seem fazed by her beauty. He talked to her as if he was curious about her and how she felt during the day.

She doesn’t want to talk about what she’s doing, she wants to tell you how she’s bored.

The trick is to be original, make her laugh once, make her smile. Get her interested in you, let HER ask a question. Bait her, make her ask you things by having suggestive sentences.
ie: “I just got back here and now there’s a storm!” She will ask you “Where have you been?”

Then get her number. Call her the next day. She’ll thank you for it.

I want to tell you what it is like to be one of these women. It’s important to be able to see the world through an attractive woman’s eyes.

Imagine just for a second…

You are walking from the subway to the store to return a pair of shoes you bought last week.

Not one minute off the subway, a man looks at you and smiles. He holds eye contact past the point of being comfortable, but says nothing, and keeps walking.

Now on the street, another guy looks at you and exclaims “Wow, you’re hot.” And continues to watch you as you walk past him.

What was he expecting? Did he thing you would turn around and chase him down simply because he expressed his interest? Jeez. This is getting old. You just want to return your shoes!

Once in the store, you are on your way to the counter when a very sophisticated older gentleman approaches you.

He seems very nice and holds up a conversation pretty well. He tells you your eyes are pretty, and he was intrigued by your smile.

This is somewhat refreshing, since he seems to pay attention to you.

But his compliments don’t stop there. Now he is looking at your breasts. And he is telling you your shirt is also very pretty. Ok Ok… enough old man, I get it.

And now he is telling you he would like to buy you a diamond necklace to go with your shirt.

What? What did you do to win this man’s attention? He must be very desperate. Does he do this to every girl?? Can you see how frustrating life can be for one of these women?

Be Fearless And Women Will Respond

Every man is either too scared to make a real approach or so nice that it is sickening.

That’s right. The way to get the attention and build attraction with these women isn’t through money, fame or good looks. You must be different and distinguish yourself from every other guy who has given her attention in the past 24 hours.

In a nutshell, the two most effective ways to distinguish yourself from the monotony and endless barrage of boring men lies in the following two behaviors.

1. Have the confidence to approach, hold eye contact and have a normal conversation with her.

Most men are intimidated by beautiful women. Don’t be one of them.

2. Be more impressed by her personality than her physical beauty.

Take the time to learn what makes her special from every other woman around you. Learn about her interests, passions and dreams. Then use those as starting points to demonstrate your interest in her.

Mastering those two things will put you light years ahead of most men out there, and put you in a position to find a really beautiful woman who appreciates being with you as well. If you’re really interested in turbo-charging your progress and learning things that 99% of men don’t know about women, then the next step would be attracting women of high quality into your life. It will change your life and you’ll be attracting more women of a higher stature than you can handle in one evening. 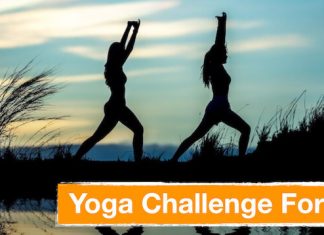 Chris Calo -
0
If you want to practice yoga, then this yoga challenge for two is a great way to strengthen your relationship and find...